It’s usenix and we have a BOF tomorrow night, so we have to get the minicluster going. Five AMD Persimmon boards in a stack and 1 Minnow MAX.

We had really high hopes for the minnow max but it is a bit of a disappointment. Super neat size – see the little blue box hanging from an ethernet cable in the 5th picture? It was kind of exciting to see so much in such a small box.

We’ve concluded that to make this board usable for Harvey we’re going to need to swap out UEFI for some other firmware. it took us 15 minutes just to walk through enough of the commands and dialogues to realize we can only boot from a FAT-formatted SD card. FAT formatted. 2015. What’s wrong with this picture?

So then tried PXE boot. See John taking a movie of the TV? It’s because when UEFI pxeboot fails, it puts the failure frame up for 1/30 second and clears it. So John took a movie, and then we watched the movie frame by frame to see the error.

Then we hit the next problem: once we got the special version of GRUB booting over the LAN, it told us we wouldn’t have a visible console. We need a console.

The AMD stack, with three coreboot nodes and two AMI BIOS nodes, worked better. The only thing that went wrong is that the AMI BIOS breaks pxelinux.0 – it loads and gets to some point, and then instant reset. We can still boot harvey on the AMI BIOS nodes, but only from a USB stick. We’ll be reflashing these too. 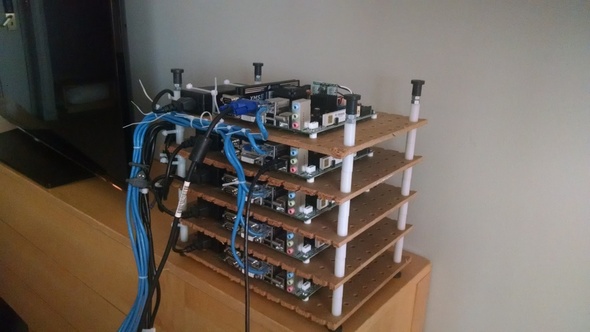 Harvey mini-cluster ready to fire up (or catch fire) 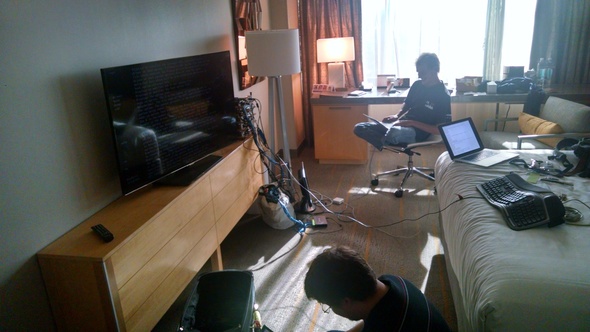 John on the floor, trying to make the minnowmax boot Harvey, Aki on the chair making Harvey build on a mac and boot off of one. 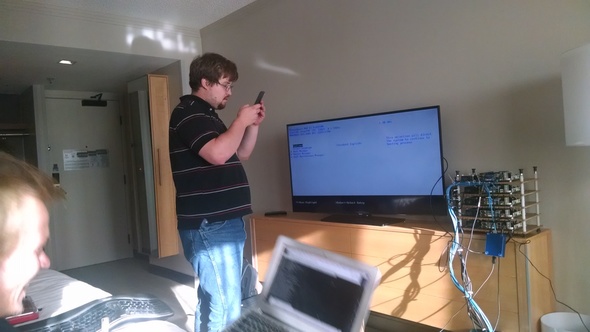 John decided taking a video of the boot sequence would be the best way to capture the sub-second error message.